Connecting Signs - The Ripples of Success - 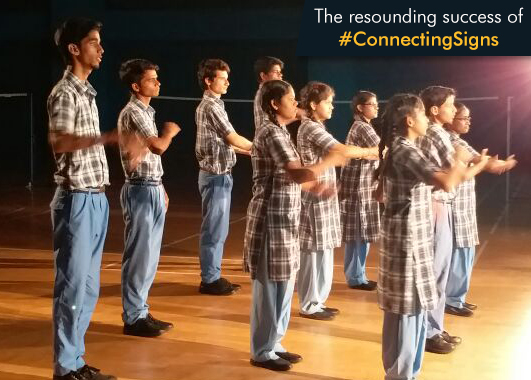 Disabilities go beyond race, culture, age, gender and religion. As a society, we have always had the tendency to box people under different labels, and “categories”. But what we don”t realise is that humanity transcends beyond these stereotypes. Humans are beautiful and capable in every way, and they have a lot to offer the world; more than we can ever fathom.

Connecting Signs, an initiative by The Ponty Chadha Foundation, has not just educated the masses about sign language and its importance, but has also made people realise that specially-abled children, despite their disabilities, have endless amounts of talents and skills that can shape the world in a wonderful and meaningful way.

Over the last two months, the children of MBCN have left no stone unturned in making the Connecting Signs campaign a successful one. They went to several institutions and local eateries to share some knowledge on sign language, and taught different gestures and words, all of which were truly enlightening.

What really topped it all, however, was the Indian national anthem in sign language, which garnered 2,144,759 views on Facebook, besides reaching 9,664,507 viewers. To add to these fantastic figures, the 25,000+ shares really got the ball rolling in the right direction for the overall purpose of this campaign. In a nutshell, many hearts were touched on virtual as well as off-line platforms.

It has only been a couple of months, but the Connecting Signs campaign, has created countless ripples of change in our society. People have walked away with a sense of pride and wonder on seeing these special children, and their sheer positivity that outshines the disabilities they may have had.