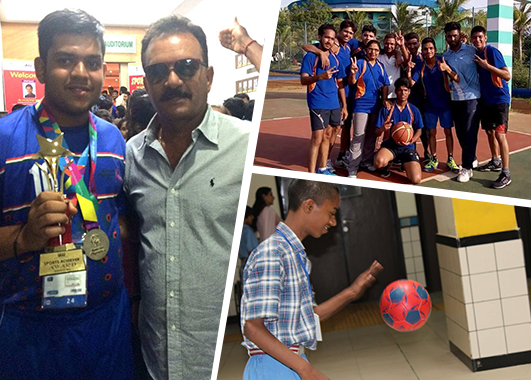 Playing sports is a key part of our school experience and it can have an immense impact on every student”s life. Participation in sports may bring benefits like promoting socialisation, developing leadership skills, focus as well as physical fitness. It teaches us discipline, grit and teamwork, the lessons that are imbibed by us for a lifetime.

We must understand that students with any kind of disability are the same like their peers who do not have any such limitations and therefore, get the benefits alike from participation in sports. But, most of the times, they are denied any such chances to participate and gain respectability out of it. Though, the coach”s job is to pick up the best team in school, people with disabilities should be judged on their individual capabilities. Here”s a very interesting excerpt from TEDxTalk held in May, 2016 where, Madhavi Latha, National Paralympic swimming champion speaks about the importance of sports among the disabled.

Madhavi and sports, two never meeting worlds, this is pre-2007 and Madhavi and sports, two inseparable entities, this is post 2007. “My victory in swimming completely changed my perspective on life. Earlier I thought I could use only my intelligence. Now I am confident that I can achieve anything in a different way.” – Madhavi Latha, the 80 percent disabled National Paralympic swimming champion on importance of sports among the disabled.

She is an associate Vice President, Scope International as well as an activist spearheading the cause of sports for the differently-abled people. She founded the ‘YES WE TOO CAN’ movement and stands President of the Wheelchair Basketball Federation, India. She draws from a personal experience with Hydrotherapy to urge the society to offer a level playing ground to the differently-abled people in sports.

We believe that they should not be left out because of prejudices or stereotypes existing against them. Schools do not need to change the rules of a game or offer a competitive advantage to students with different abilities. They are just required to go for reasonable modifications like using a laser rather than a starter pistol to begin a race so that a hard-of-hearing runner can compete. Such modifications ensure that they also get an equal opportunity like everybody else.

Moving forward with this belief, our charitable school for special children, Mata Bhagwanti Chadha Niketan (MBCN) also encourages its students for the same. It teaches them to practice hard and always stay on the forefront when it comes to taking part in opportunities thrown by life. Students took to this lesson religiously and since then, have always excelled in the field of sports. All these MBCN sports achievers have received laurels at the sports events organised by NCC camps and Special Olympics Bharat.

Take a look at their achievements in the past one year to feel how they have responded to this teaching.

”¢ Arushi Sharma ”“ She did her school proud by winning a gold medal at basket ball national tournament held in Gujarat in March 2015. She carried forward her winning streak by whisking away another gold at the Delhi state competition of badminton held in May of the same year. As if two were not enough, she made a hat trick by winning a third gold at national level championship of Floor Hockey in Solan, Himachal Pradesh during December.
”¢ Shashank Shekhar ”“ Another star-in-the-making was a boy who clinched a silver medal at the Delhi state tournament in carom organised by Very Special Art in April 2015.
”¢ Akshat ”“ He came, he took part and he swept a gold medal at the Delhi state tournament of Table Tennis in May 2015.
”¢ Shrey Kadian ”“ The boy heightened our enthusiasm with his determination and perseverance. He went all the way to World Games held in Los Angeles to get a gold in softball as the event went on in 2015 from June to August.
”¢ Deepanshu Nath ”“ He participated in the State competition of Skating to fetch a gold medal same year in September.
”¢ Swechchha Nanda ”“ When the national championship of Floor Hockey was organised in Solan, Himachal Pradesh this year in December, this girl was able to manage nothing lesser than gold.
”¢ Akshay Bora ”“ The year 2016 started on a winning note when he brought two shining golds home in snowboarding at National Snow Games held in Narkanda, Himachal Pradesh during March.
”¢ Anuj ”“ He was star of the show at Delhi State Games as he grabbed a gold in table tennis in April 2016. At the Delhi State Games tournament, he proved his mettle in basketball again during July while receiving a gold. His love for basketball was evident when he got a gold in August at national games in Chennai.
”¢ Sahil ”“ It was another proud moment for MBCN as he took a gold in table tennis at Delhi State Games in April. He proved himself again at Delhi State Games of badminton to bring a gold the same year in May.
”¢ Rohit Raina ”“ At the State Games in Softball, this boy rose high to take away gold in August 2016.