Grandparents Set the Stage at MBCN on World Elderly Day - 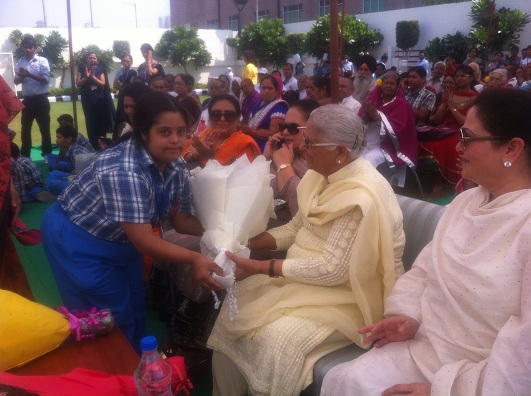 World Elderly Day, also known as International Day for Elderly People was celebrated with great fervour at Mata Bhagwanti Chadha Niketan (MBCN) to recognise the contribution of elders towards the society.

The aim of observing this occasion was also to create awareness amongst the masses about the issues affecting the elders. This move was in lieu of encouraging people to understand their responsibilities towards making lives better for the elderly.

This year, Mata Bhagwanti Chadha Niketan, a special school for mentally disabled and physically challenged organised the World Elderly Day in its own way over the theme of sustainability and age inclusiveness in the urban environment. The school was set-up by The Ponty Chadha Foundation (PCF) with a view to educate and empower the differently-abled children by imparting knowledge and skills to them. The PCF was founded as the result of a philanthropic attempt of the WAVE Group.

A demographic map reveals that there are approximately 600 million people around the globe who go over 60 years and the number is estimated to be two billion by the end of 2050 with majority of them being found in the developing countries. Keeping the above information in mind, there is a need to make people aware about the problems faced by the elderly persons living across nations and their contribution.

Therefore, MBCN decided to act as a WaveOfChange by organising an event where grandparents received a grand welcome at the hands of the special children through their handmade cards and flowers. They also had gifts as a token of greeting for their grandparents. The celebration was observed to be a success as it allowed the children to spend quality time with the grandparents. The occasion witnessed several fun activities that were organised for both the children and their elders so that they can they can have a gala time while strengthening their bond while playing games like musical chair.

The activities were followed by snacks being distributed among the participants and guests who were present at the event. Elder people from the Varishth Nagrik Kesari Club were also seen at the programme who regaled the audience with their dance, song, speech and poem performances so much so that the atmosphere was filled with the applauds of the guests on the melodies of heart-warming music. The elderly came together with all the parents to shake a leg on the foot-tapping Bollywood dance numbers.

Sky is the Limit

The occasion was concluded with a message from Dr. Vandana Sharma, the Director of MBCN who emphasized upon the role of grandparents in shaping lives of the differently-abled children. She said that grandparents play a vital role in the development of a special child. They should handle such children patiently and try to help their special children in keeping cool. Grandparents play a phenomenal role in making the children learn about respecting the elders and other moral values that may go a long way in building their personalities.

MBCN thrives on the motto of the all-round development of a child with special needs. This is the reason why it stands out among all the special schools for mentally challenged and physically disabled throughout India.