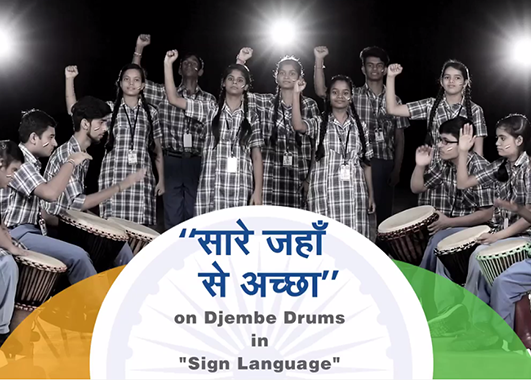 On the 15th of August in 1947, independent India was born – making many million hearts brim with joy in the afterglow of freedom. 72 years later, the day still evokes a similar emotion.

While events and celebrations in honour of this day are held throughout the country, and amongst Indian communities abroad, children with special needs at Mata Bhagwanti Chadha Niketan are celebrating it in their own special way.

Over the last few months, these children have put in their tireless efforts to make our ”˜Connecting Signs” campaign a successful one. It is is a year-long endeavour, which has raised greater awareness around those who can”t speak or hear. This campaign has made people realise that, despite having limited abilities, these children are no less! They have boundless talent that can help make the world a beautiful place.

Last year, our children recreated Jana Gana Mana in sign language as a part of the campaign, reaching more than two million views. Moving ahead with the same spirit this year, MBCN students chose to recite ”˜Saare Jahaan se Accha” in sign language. A popular verse penned by poet and politician Muhammad Iqbal in 1904, this poem has been immortalised as a song plenty of times, yet we are sure that this is definitely one of the most special versions.

As a progressive society, we love exploring new things all the time. However, to help those who need us the most, it is imperative that we first understand their language. Watch the video here: